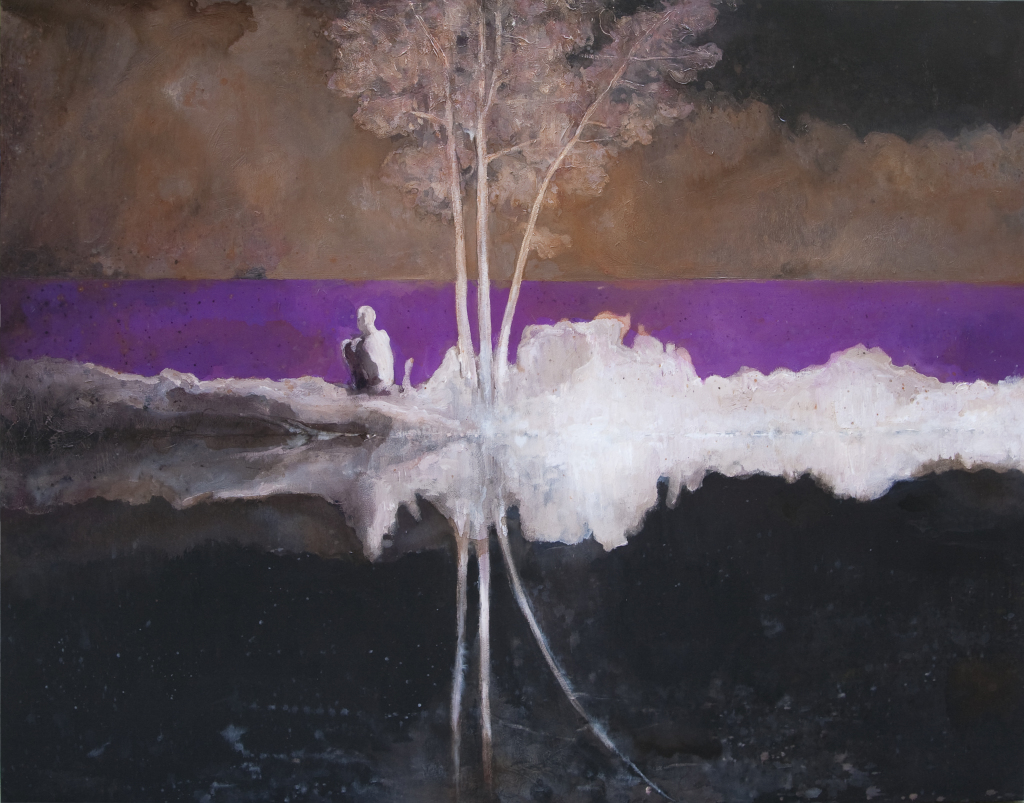 In the latest works of Orion Shima,an artist  working in Tirana where he teaches at the Academy of Fine Arts,emerges strongly the theme of landscape and representation of nature.Landscape in facts has been a minor theme during the communist regime years,when pictorial representation had to show almost exclusively the various aspects of work,often interpreted heroically in a sort of neo-classicist key that reflected the Eastern European styles of representation.If we think about the importance the landscape theme has had in the evolution of modern painting (from romanticism to abstract painting,according to the thesis of  Robert Rosenblum),the underrating of such a subject in the short history of Albanian painting-as evidenced by the recent reorganization of the collections of National Gallery in Tirana- it is a clear testimony of those deficiencies that have altered the perception of modernity,even in the arts,in Albania.Even now this is a difficult subject in a country undergoing profound changes and at times very radical modifications of the urban fabric due to the vertiginous building fever sweeping all the major urban areas of the country.Perhaps this is the most visible outcome of the political changes from the nineties onwards,one which poses many environmental problems both in city centres and in the more remote areas.The landscape theme that emerges repeatedly in the works of Orion Shima seems to represent a utopian,almost neo-romantic answer to these environmental problems.The artist takes refuge in another landscape,based on the reinterpretation of some of  the great pages of  Western art,on a subject rarely touched by the context and cultural traditions in the midst of which Shima works.In his work one can find traces and echoes of both,German romantic painting (especially C.D.Friedrich),and contemporary painting (from Anselm Kiefer to Peter Doig).Precisely echoes:reflections of an artistic research that has developed elsewhere,mainly related to the intensity of a confrontation with bature and the imagery that it is not something immediately obvious,if seen through Albanian eyes.The work of Shima approaches the landscape theme in a manner that cannot in every case depart from a painting tradition properly historicized.In his case this is an a posteriori rebuilt pictorial tradition,receptively collecting various experiences,typical of Europe’s cultural traditions,especially northern-western ones.His is not a realistic landscape,or that has any connection to Albanian territory,even if sublimated pictorially.What matters to Shima is not this,but turning the gaze and attention in other relationships ,available to listen to the echo of other landscapes,other relationships with nature(and presumably,the genealogy this would represent),rebuilding his own vision based on the formal languages of European tradition,reinterpreted personally.For instance,the reoccurrence in many recent works of the deer figure is emblematic- the most comprehensive examples of which are the works on paper.The deer is an animal that neither has any particular value attached to the symbolic world of Albanian imagination,nor does it have any particular relevance to the local or national heraldry.It is a rather a symbol rebuilt using what other symbolic and imaginary universes provide,made available by the daily circulation of information,and filtered by the selectivity of individual taste.In this sense ,the deer is an empty,uncanny symbol,like an animal that makes his sudden and inexplicable appearance on a primordial and original land,covered in snow with slightly fairytale-ish tones,that does not represent  any specific place and it is therefore on the whole utopian,almost a land seen in dreams.